In the city of Schwerin, the capital of Mecklenburg-Vorpommern state (Germany) on 16 and 17 of June 2017-2019, the famous SCHWERIN CASTLE from for two days turned into the main European Art Object, to which not only residents of Schwerin сame all together, but also guests from other parts of Germany, as well as from other countries.

As soon as the sun went down, and the darkness covered the huge castle surrounded by water - a UNIQUE SHOW with VIDEO PROJECTION, LIGHT and MUSIC began. During two evenings the audience could see two different shows.
And if on the first evening it was an incredible, colorful show with three-dimensional pictures, light flashes and unexpected effects, on the second evening, stories from the history and life of the Schwerin castle were appeared and told in an unusual and memorable way. 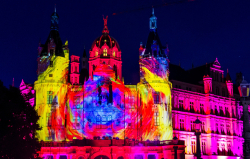